My final card for the current Simon Says Monday Challenge "Down on the Farm" features a photo that I took of a neat barn here in Wisconsin. The great antique tractor image is from a Beccy's Place digi set named "Farm Fresh." I colored the image with Spectrum Noir markers. The sentiment on the inside  is from the "Farm Fresh" set, and the sentiment on the front is from another Beccy's Place digi set named "Just Desserts." 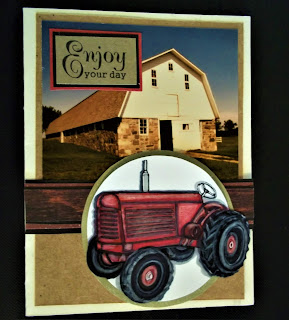 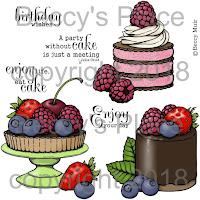 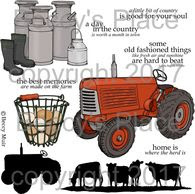 This sweet image, named "Kitty Selfie" is from Di's Digis, and is available right not for just $1. Get it HERE.  [The image actually has two cute critters, but I totally messed up the coloring of the larger image. So I cropped the salvageable part. I posted a copy of the  B&W watermarked image so that you can see the Kitty that I messed up.] Used lots of texture on this card so that I could enter it into Di's current challenge. It has straw ribbon, a sparkly star, smooth star brads, rub on "SMILE" sentiment and a satin bow. Also, since I added stars and he is standing on a tag that says "Superstar" I'm also entering this little cutie into the current challenge over at The Paper Shelter. 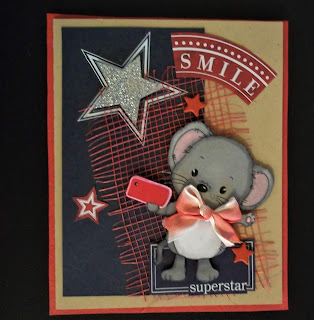 After one of the longest, and snowiest winters in the record books, spring is finally arriving in the Midwest. Below are photos from our windows just a few months ago. Plus photos of delicate flowers blooming beneath those very same windows today.  We've had a few nice April rains in the last few days followed by sunny days and that seemed to wake the earth. 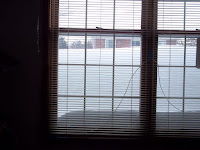 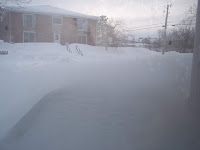 The stark difference between the photos reminds me of the wonderful verse in Isaiah that speaks of the promise of Spring growth. I decided to make a card for my MIL with this verse. I printed it off from my computer, then pulled out an assortment of tiny floral stamps from several companies including Art Impressions, Stampendous, Posh Impressions and Hero Arts. Gathered several ink pads in pastel colors and got to work. When I was finished stamping around the verse, I noticed a few extra magnet strips [leftover from the Mermaid fridge magnet in my last post] and decided to trim the stamped verse into a bookmark. It is so quick and easy to do. [You can find instructions HERE.]  The sentiment on the inside is an old wood mount from Pinterest, and the Thinking Of You sentiment on the front of the card is from a small South Dakota, family-run,  company named Petersen Stamps that is no longer in business. [That sentiment doesn't show very well in the photo, but I actually planned it that way. I wanted the stamped verse to take center stage. That is also why I stamped the floral images in pastel colors and also filled the edges with second and third generation images.] The final touch was to add the little note to the inside that mentioned the magnet. [I enlarged the photos to show the details as they are pretty light.] Am entering this card into several challenges, including two that feature April Showers. My card doesn't show the actual rain, but it shows the wonderful results of Spring rain. Amen and Amen. 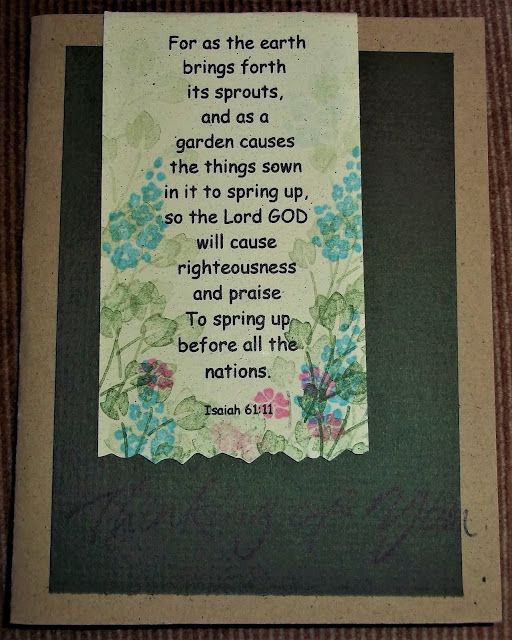 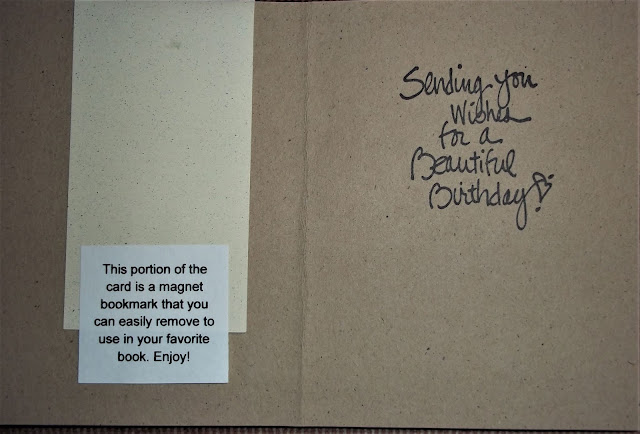