It’s the 15th of the month which means it’s time for a challenge at QKR Stampede which is always “Anything Goes” and several prizes are awarded. Stop by the challenge and maybe you’ll be inspired to enter a card or two yourself?
My DT card features a sweet angel that was easy to color with just a few markers and a white gel pen. The little hearts on the digi inspired me to use heart patterned paper (in black and white) on my card. I even paper pieced a large heart from a matching paper (in red and white) for the angel to hold, and a few smaller ones to embellish the inside sentiment. I also love the fact that the sentiment ends in dot-dot-dot (which to me means the sharing goes on and on!) 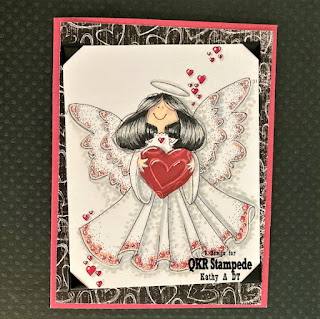 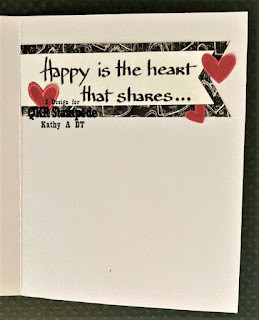 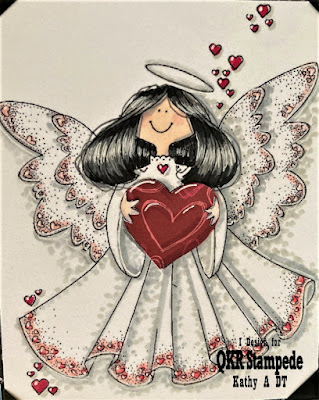 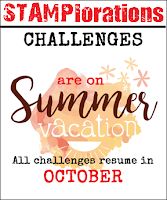 Entered into:
Word Art Wednesday Challenge- #503-504 Anything Goes
Cute Card Thursday- Challenge 691- Anything Goes
Crafty Hazelnut’s Patterned Paper Challenge- August
STAMPlorations- Theme & Photo Prompt Challenge (August- Anything Goes)
I’ve had both this funny (yet sadly realistic!) sentiment and sweet digis in my collection for some time, but never thought to combine them until now. And I love the result. To add a little extra “conversation” on my card, I cropped two of the cute travelers from the ADU digi named “City Girls” digi, printed, colored, trimmed, and layered them onto scraps of cardstock and patterned papers before adding the sentiments. After a little experimenting I came up with this fold to be able to pair the inside sentiment with the second girl, but she still shows up when the card is closed. Fun! 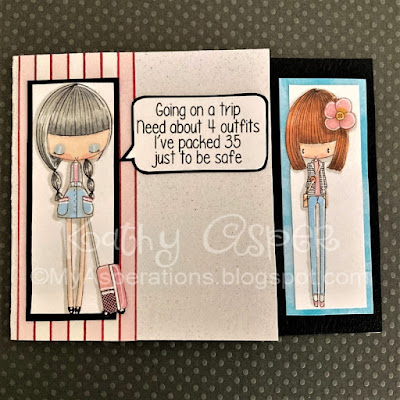 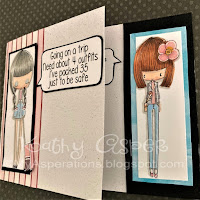 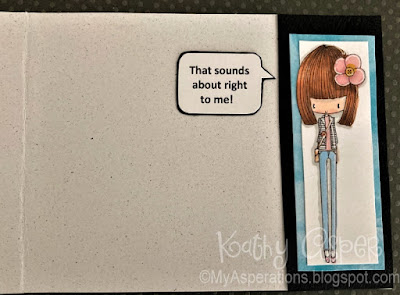 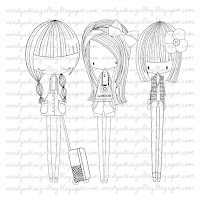 ·   Inside Sentiment- Gingershouse.blogspot.com Freebie (Going on a Trip)

Simon Says Wednesday Challenge- Funny/Punny
Lil Patch of Crafty Friends- #164 Anything Goes
Polkadoodles Challenge- Week #32 Anything Goes
All Dressed Up- #120 Anything Goes (August)
Besties Challenge- August Anything Goes
Cute As A Button- August: CH #71 Anything Goes + Polka Dots
I wanted to make a few cards for the current Mason Jar Challenge at Double D’s. So pulled out
a Fiskars set I’d bought years ago but had never used. Was so fun to play with it. This is the
first of two cards. I used a marbled blue paper as my base, sponged some grass across the
bottom, stamped the jar and bugs, then added pine branches in the sky... and also for some
added texture on the sponged grass.  I stamped just the lid on a scrap of silver cardstock,
added shading them trimmed, and adhered it to the top of the jar.
I’m entering this card into several challenges including Scribbles Designs- Create a project that touches on the world of FANTASY, wonder, magic, or whimsy. (I chose Fireflies, or Lightening Bugs as we called them when I was a kid and first captured them in a jar at a relative’s farm in Iowa. Nearly half a century later they are still magical to me!) 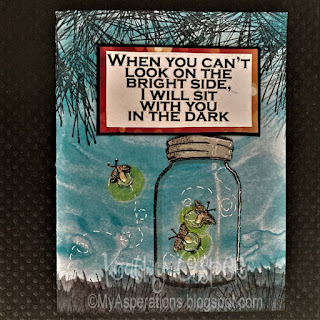 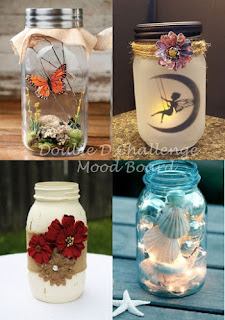 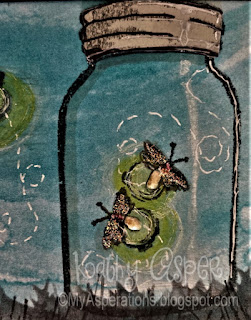 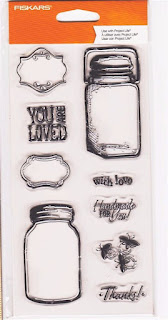 ·   Liquid Pearls in Buttercup (on their little light bulb butts!)

·   Front Sentiment- Gingershouse.blogspot.com (When you cant look on the bright side)