It’s Friday, so time for another challenge at QKR Stampede!  Stop by the challenge, which is always “Anything Goes” and several prizes are awarded. Maybe you’ll be inspired to enter a card or two yourself?

This week I made an extra DT card using a few wonderful patriotic digis. I’m working in gift packets of cards and needed some 4th of July cards so was excited when I remembered that I had these wonderful images. Each of the cards features the Eureka Stamp sentiment [ES-digi37801-Declaration of Independence] that you can find HERE. The Happy 4th of July sentiment is computer generated with a font named Asiyah Script, which I feel looks very similar to the font on the other sentiment.
The first card features a cute cat image from Eureka Stamps (ES-digi33001 Patriotic Kitty) colored with Spectrum Noir markers and a white Sakura Gelly Roll gel pen. Scrapbook paper added color and contrast. 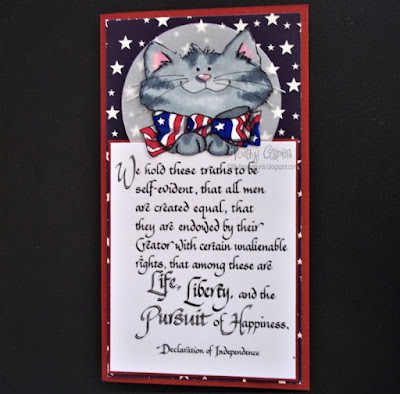 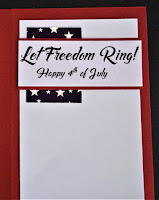 
The second card features a cute pup image from Eureka Stamps (ES-digi33103 Patriotic Puppy) colored with Spectrum Noir markers and a white Sakura Gelly Roll gel pen. The blue paper is actually a scrap of vinyl wallpaper from a give-away wallpaper book that I picked up at a paint store many years ago. A bit of checked ribbon and a sprinkling of white star stickers finished the card. 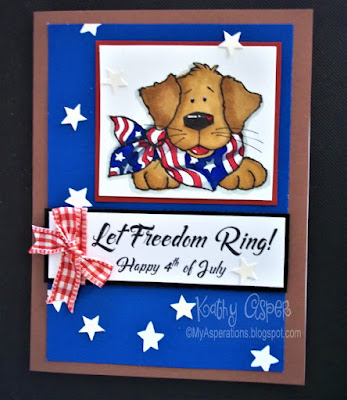 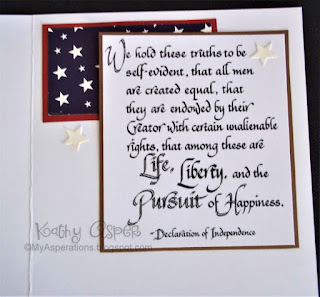 My final post for this blog is a card for the current Double D’s Challenge that requires our entries feature one of the items in the inspiration photo. I chose a to stamp a single, beautiful tulip using a Posh Impressions wood-mount stamp. I inked the image with two shades of pink pigment inks and two shades of green, them firmly pressed the stamp against a scrap of very light pink mulberry paper. (You can't see this layer of mulberry paper very well in the photo, so I took a closeup. You can see that this unusual mulberry paper, which I've had it in my paper stash since 1997,  has threads of white, pink and yellow.) I backed it with a piece of white cardstock, and then a piece of pale green mulberry paper. The sentiment is a Couture Creations die-cut named MINI HELLO FRIEND that I purchased from Simon Says Stamps. The final touch was to add a touch of bling with a tiny pink rhinestone heart sticker. 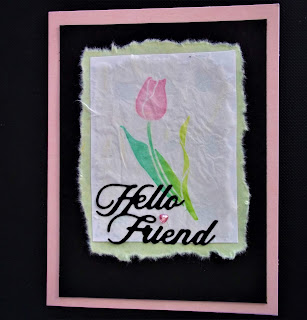 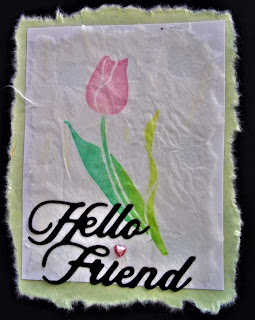 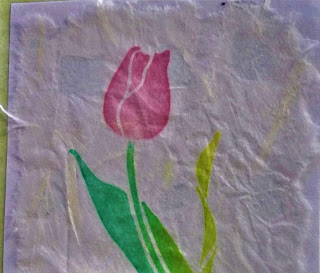