It's Wednesday! So it’s  time for another challenge at Penny's Paper Crafty Challenge Blog where challenges are always Anything Goes and prizes are awarded from one or more sponsors.  Stop by the blog to check it out!


As I DT I get to choose the images that I want to use. This week we have two sponsors and I wanted to use images from both… so I did! The first card features a new sponsor, but one that I know and love, Beccy’s Place. I’ve been a Guest DT for artist Beccy Muir for several years, and now serve as one of the “Contributors” for her blog. I love how easy Beccy’s images are to color as the lines of her artwork are so clean and bold. For this card, I used an image and two sentiments from a Beccy’s Place digi set named “South of the Border.” I created the A7 sized card base, which I decorated with patterned paper. I colored the cute sloth with Spectrum Noir Coloring System alcohol markers and a Sakura Gelly Roll white gel pen, then fussy-cut and adhered him to the inside of the card. It took me a little time to work out the dimensions so that the sloth didn't stick out of the card when it was closed. But I was finally able to fold the image correctly so that the cutie holds his arms wide to match the inside sentiment. Next time I think I’ll make a long thin card that will fit into a #10 envelope. That will allow the sloth to stretch out a bit further, bending at the wrist instead of the elbow!  I am entering this card into several challenges, including Simon Says Wednesday Challenge "Interactive." 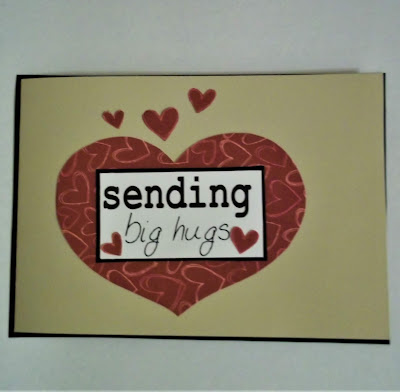 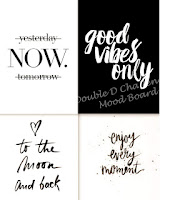 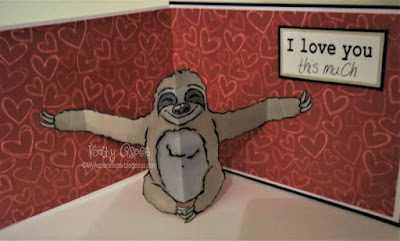 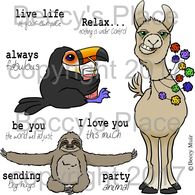 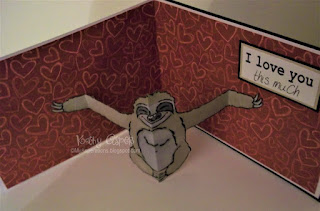 The second sponsor this week is Patties Creations. I love Pattie’s image named “Cardinal on a Branch with Snow.” I used an upcycled calendar page as the card base, colored the cardinal image with Spectrum Noir Coloring System alcohol markers and a Sakura Gelly Roll white gel pen. I embellished the finished card with snowflakes cut from a Lawn Fawn die set and Polar White Flower Soft mixed with micro-fine glitter. The sentiment on the front is from a Beccy’s Place digi set named “Baby Robin” and the inside sentiment is from a Beccy’s Place digi set named “Bessings of the Season.” Am entering this card in several challenges including Day 25 of Spectember- Holiday Time. 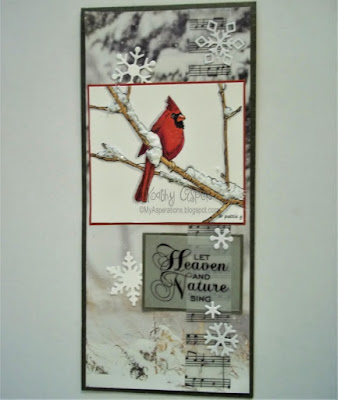 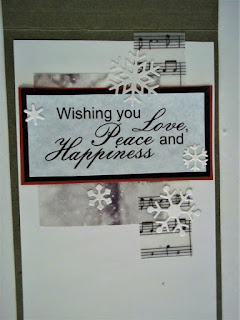 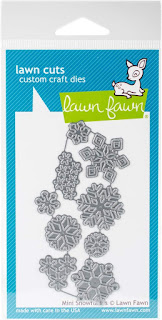 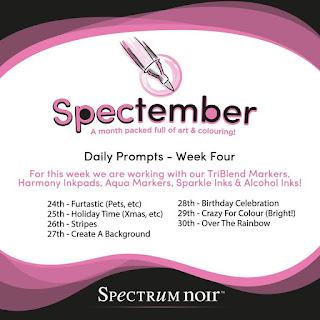 I couldn’t wait to get to Day 24 of the Spectember challenges because the theme is Furtastic, and I knew exactly which stamp to use. The cute feline in the stamp set from Biblical Impressions named “Crazy Kitty” always makes me laugh. So I pulled it out, stamped it on cream-colored cardstock with black ink and got to work with my Spectrum Noir Coloring System alcohol markers and a Sakura Gelly Roll white gel pen. The paws, which come in the set, were stamped on scrap paper, colored and fussy-cut. I then mounted them with foam tape, positioning them to look like the kitty was peeking over them. Isn’t the little fur face adorable? The sentiment on the front is a vintage wood-mount stamp from Printworks. The “Excerpt from the Diary of a Cat” on the inside is computer-generated. I found it on the internet years ago and it was love at first sight. (Since I like to give credit when I use an image or sentiment, I spent time researching its source when I used in it past posts. I couldn’t find the original author, but in 2017 I did find this article from the 1990s that included it. I just checked and that site is no longer available. Instead, the fun sentiment appears to be in a 400+ page book named “Getting Out: Excerpts from a Cat’s Diary” by John Woodcock. I plan to check it out!) 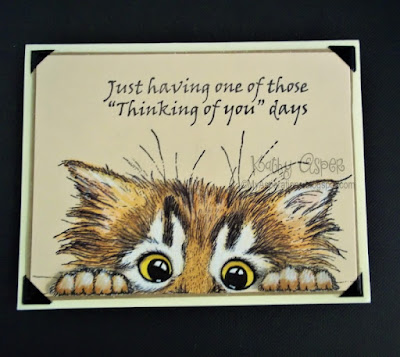