It’s Friday and time for the Colour Crazy Challenge. This challenge is an “Anything Goes” but it adds a requirement; the creation needs to include coloring in “any colouring medium you like, onto any project you like, and in any colours you like.” I’ve never outgrown my love for coloring… which is why making cards is stress therapy for me!!
This week's sponsor is Polkadoodles and I’m sharing fun card that features a digi image from Polkadoodles named Gnometastic Birthday Cake. I colored the handsome guy with Spectrum Noir Classique Markers and a Sakura Gelly Roll white gel pen. To provide the card with a crisp, clean feeling, I kept the number of colors used to a minimum, leaving lots of white space, including a hand-drawn candle glow made with my trusty white gel pen! A strip of a checked paper napkin provides a nice base to reinforce the food theme and the humorous inside sentiment adds a bit of reality to the card. (Heh heh!)
Supplies:
·   Digi- Polkadoodles (Gnometastic Birthday Cake)
·   Colored with Spectrum Noir Classique markers and Sakura Gelly Roll white gel pen
·   Inside Sentiment- Freebie from Kellie Winnell (this sentiment appears to no longer be available- but there are many other fun freebies on her site)
·   Pioneer Black Photo corners- available from several sources
·   Checked paper napkin- from our local Dollar Store
Entered into:
Bugaboo Stamps- June Week 2 Anything Goes
Cute Card Thursday- Challenge 689- Anything Goes
This card features a beautiful image named “Bridal Veil” from Cute As A Button’s June Progressive Challenge. A friend’s son is getting married next month, and I decided to make a special card for her future daughter in laws bridal shower. I tried to match her hair and eye color, and used lots of elegant items including silver paper, satiny tan cardstock with flocked black swirls and a piece of antique lace. Because every bride-to-be needs some bling, I added a sprinkling of tiny rhinestones on her veil, and in her earring, I added a single rhinestone, slightly larger and a lovely pale blue to match her eyes! (I added a closeup pic of this bling.)
Note- I'm not very happy with the roses, as I had the great idea of using a layer of white pencil on top of the alcohol markers, thinking it would give the petals a velvety sheet. Didn't work as well as I'd hoped, and caused the white gel pen to smudge. "Fixing" them only made a bigger mess. So... I've convinced myself that they look a bit ethereal?!  :) 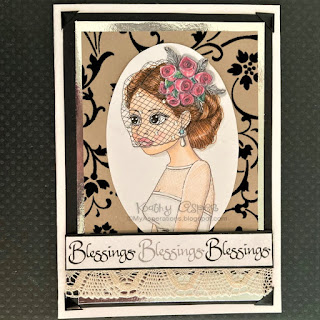 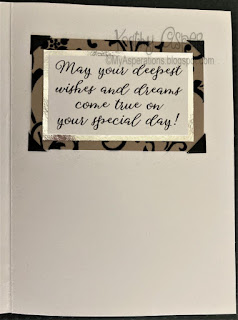 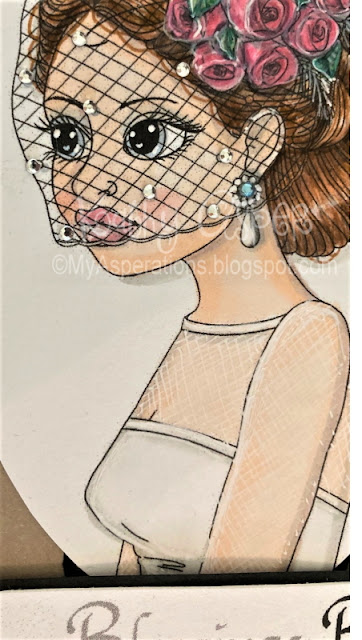 Supplies:
·   Digi- Cute As A Button (Bridal Veil)
·   Colored with Spectrum Noir Classique markers and Sakura Gelly Roll white gel pen
·   Front Sentiment- Eureka Digi (Blessings) Also available in unmounted or cling-mounted
·   Inside Sentiment- From We Are 3 Digi Set (Special Wishes)
·   Pioneer Black Photo corners- available from several sources
·   Silver Card- from a Hobby Lobby set of metallic A2 cards and white envelopes
·   Flocked patterned paper, a scrap of antique lace, and small rhinestones from my stash.
Entered into:
Cute As A Button-MeWe Progressive Freebie Challenge #49 Bridal Veil
Cute As A Button- June: CH #69 Anything Goes
Word Art Wednesday Challenge- #497-498 Anything Goes
Crafty Hazelnut’s Patterned Paper Challenge- June
Outlawz Challenge- Festive Friday
Several months ago I was the random winner of a sweet digi set from a Coni Fong FB contest! (If I remember correctly, I squealed with delight when I read about my win!) I colored, fussy-cut and adhered the little cutie (named Lonny) onto cloudy sky scrapbook paper. The pretty balloons (on front and inside) were created with scraps of plastic index divider sheets. (These wonderful items- sometimes called document file folders- come in a pack of assorted colors and can be found in the office supply section of most stores and occasionally even at Dollar Stores. They're cheaper than colored vellum and more translucent. Punches and dies don’t work on these sheets, but they are easy to fussy-cut with a sharp pair of scissors after tracing shapes on them with a black permanent fine-line marker.) The balloons are attached with just a little bit of snail adhesive, then I added bows and strings with the permanent fine-line marker. The sentiments are computer-generated. 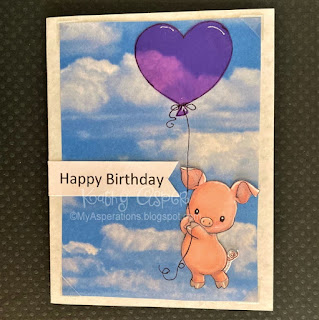 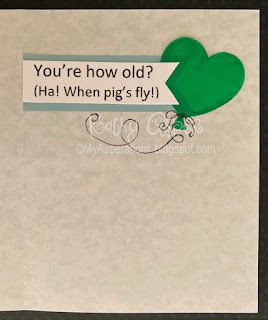 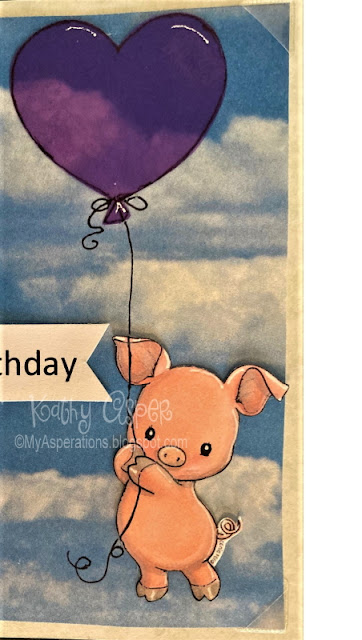